Public Bank LA is a grassroots advocacy organization founded in 2017 working to establish the Public Bank of Los Angeles to develop the local economy and provide fair and equitable financial services for the city, businesses, and residents. We led the Measure B campaign a City of Los Angeles ballot initiative and the first voter referendum in the nation seeking to establish a municipal bank.

Our money. Our values. Our bank.

The RFP for the Los Angeles public bank viability study and business plan has been issued by the City of Los Angeles’s Chief Legislative Analyst’s office. Consultant responses are due September 2, 2022. Two think tanks, the Berggruen Institute and Jain Family Institute, have assembled five working groups to analyze aspects of the Los Angeles public bank’s business plan: housing, small business lending, employee ownership, climate-centered lending, and the greater financial ecosystem. The report is expected to be completed by early 2023. 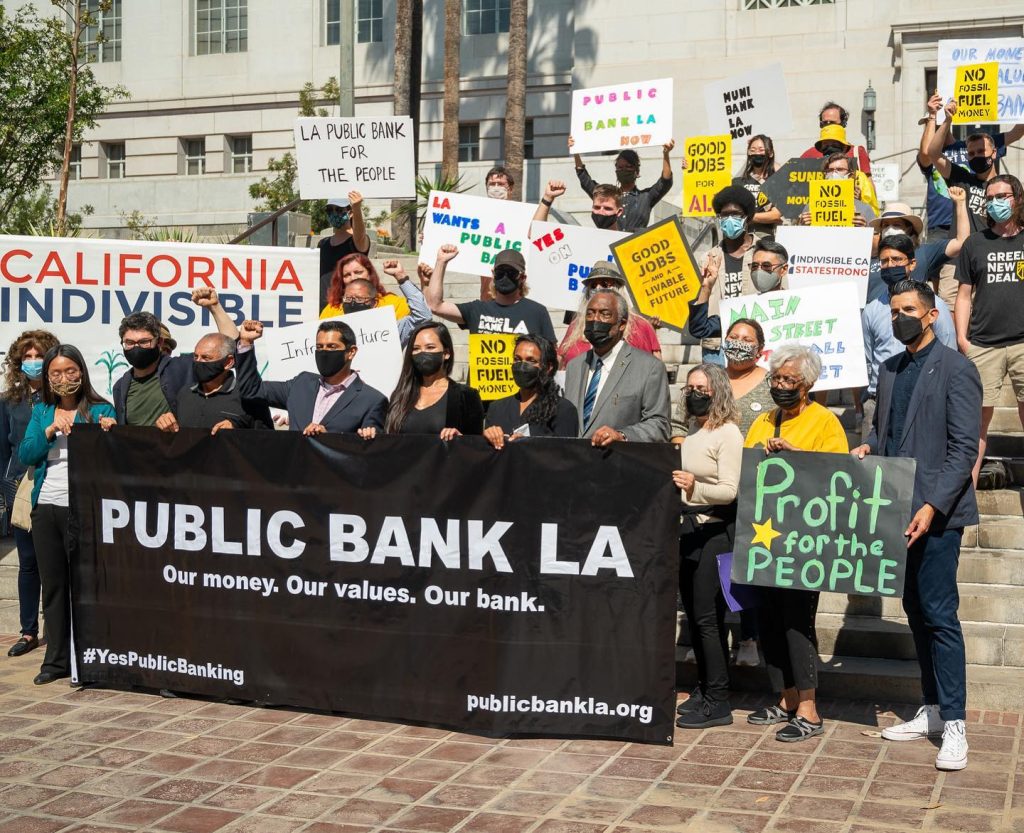 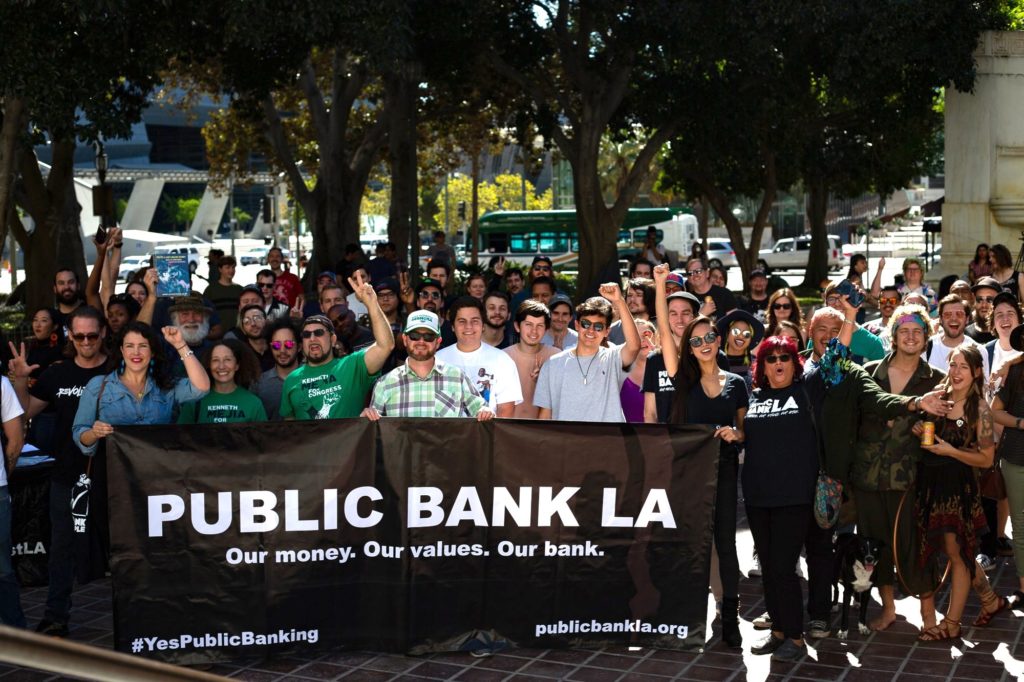 Following Governor Newsom’s signature on AB 857, Los Angeles City Council President Herb Wesson introduced a motion for an RFQ to hire a consultant for the public bank business plan. The motion was presented to the full council and on December 4, 2019, LA City Council approved the motion, voting to move forward with the process to hire a consultant. Approval of this motion now green-lights the Chief Legislative Analyst (CLA)’s next steps: drafting the scope and structure of the RFQ. The CLA was also instructed to report back on the cost of the consultant.

As of February 2021, Public Bank LA is working with LA City Council to move the RFQ motion forward in the Economic Development and Jobs Committee. PBLA is simultaneously organizing in three areas: 1) the city-owned LA Public Bank, 2) the upcoming AB 310 bill to create the CA State Public Bank, and 3) the Public Banking Act, federal legislation to be re-introduced in April 2021 by Congresswomen AOC and Tlaib.

Public Bank LA is working on a pro forma model for both the Los Angeles city-owned bank and a regional approach model. In addition, The Democracy Collaborative is conducting a research project that will (1) co-develop the Public Bank of Los Angeles’ governance and capitalization strategy, (2) analyze the benefits of the bank for the city and county’s finances with a lens toward community wealth building, and (3) analyze how external policy interventions (namely California’s AB 310, the Public Banking Act, and a National Investment Authority) will enhance the strategy.

Measure B received 44.15% of the votes with 430,488 Angelenos voting yes to a public bank, an astonishing achievement from a grassroots, volunteer-run campaign with little funding. Following Measure B, we are now focusing 100% of our efforts on building the California Public Banking Alliance coalition and leading the AB 857 campaign.

Campaign summary: LA City Council is in the process of creating their own in-house feasibility study through the Chief Legislative Analyst and City Administrative Officer, Office of Finance, and City Attorney’s office. The motion will stay in Committee until it’s ready to move into full council with a long series of recommendations. Some of the issues the City will study and report on include: regulatory barriers, purpose and structure, oversight, capitalization, liability and risks, implementation, and the budget and staffing of the bank. The City Administrative Officer has released a report that creates a basic outline of the City’s financing processes, policies, programs, and infrastructure financing alternatives.

Public Bank LA has submitted a letter to LA City Council addressing several key issues associated with forming the Municipal Bank of Los Angeles (MBLA) including: collateral, insurance, city charter amendment, and the state initiative for the Public Bank License. Below is a link to the letter which we sent to offices at LA City Hall including the: Chief Legislative Analyst (CLA), City Administrative Office and the Office of Finance and the Councilmembers on the Ad Hoc Jobs Committee regarding the CLA report on the MBLA.

On April 10, 2018, the Los Angeles County Democratic Party (LACDP) unanimously voted to endorse the Public Bank of Los Angeles, taking a position in favor of socially and environmentally responsible, state-chartered public banks. The resolution is a significant milestone for the public banking movement, as the LACDP represents over 2.4 million registered Democrats.

On June 29, 2018, the Los Angeles City Council unanimously approved a resolution for a measure that will appear on the November 6, 2018 ballot, giving Los Angeles voters the power to authorize the formation of a municipal bank under Section 104(g) of the City Charter. With authority provided by the voters, the City will be able to pursue changes in federal and State law needed to achieve the creation of a municipal bank.

On November 6, 2018, 44% of Angelenos voted to support Measure B. The measure would have allowed the City to explore the creation of a public bank. Although the Measure was defeated, the Yes on B campaign generated national press, garnered the endorsements and support of over 150 unions, democratic clubs, social justice, environmental and community organizations, and brought the issue to the forefront of politics in Los Angeles as well as the national stage.

The Measure B campaign and the dozens of public banking movements rising across the country within the past year are proof that this is an idea with widespread support and will continue to grow. It’s the inevitable evolution of a private banking system that has only served the interests of a small, handful of people. Public banking presents a viable solution to Wall Street and it’s an idea that isn’t going to go away. We are now focusing on the California Public Banking Alliance to advance statewide legislation enabling localities to establish public banks.  This is just the beginning of the national movement. And it’s a fight we are certain will be won. 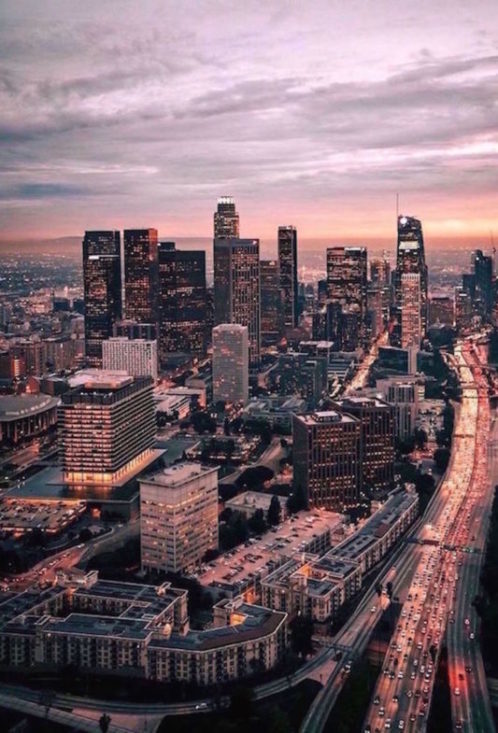